In 2010, Tom Toomey joined The Zombies, bringing his virtuoso guitar play and vocals to the line-up of Rod Argent, Colin Blunstone, Jim Rodford, and Steve Rodford. The Servante of Darkness welcomes Tom today for a chat and top ten song list which we’ll get to later. 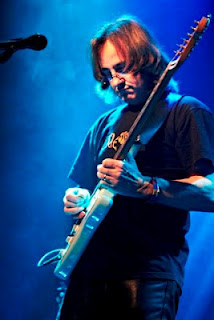 Anthony: Welcome, Tom, and thank you for joining us this month.
Tom: It's a pleasure


Anthony: Can you give us some background on Tom Toomey before you joined The Zombies? I hear you riff a great Carlos Santana tribute.
Tom: Yes I had a tribute band for many years which was huge fun. Santana covered the Zombies hit "She's Not There" and now I am playing it with the guys that wrote it. It doesn't get any better than that. I started my career at 13 when I formed the Epidemic. Since then I have been all over the world playing guitar and working with some great guys. One of the best gigs was playing in Chengdu China where I met my wife. It's amazing to be able to work at what I most love doing and that's playing. 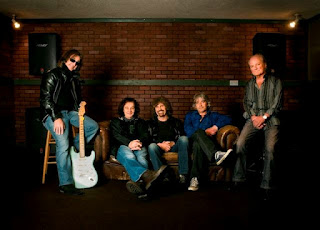 Anthony: And how is it you joined The Zombies line-up?
Tom: I met the Zombies lead singer around 20 years ago when I was asked to play guitar on Colin Blunstone’s first album for many years. I went on to do 2 more albums. That was the connection and when Keith Airey left the Zombies I auditioned and got the job.


Anthony: I saw the Spencer Davis/Yardbirds/Zombies Rock Royalty Tour at The Wiltern Theater in Los Angeles, 2009. You joined for Zombies/Strawbs tour, am I right? How has touring been going?
Tom: The 2011 tour was really great; I can remember the band getting between 3 and 4 standing ovations every night for the 6 week tour. It blew me away. The Strawbs were great fun to be with too and fab musicians.


Anthony: What are some of your musical influences? What bands or artists set you on the path for a music career?
Tom: That's easy: when I was 12 I had just learnt "House of the Rising Sun" on a battered up acoustic guitar and went down to the local youth club to see a 3 piece band playing. My mate asked the guitarist if I could play and the rest of the band weren't up for it but the guitarist let me use his electric guitar. I played for the first time on stage and was TOTALLY HOOKED FROM THAT DAY ON! Influences have been: Jimi Hendrix, Santana, Hawkwind, Pink Fairies, Gary Moore, Frank Zappa, Beatles, Kinks, Stones, Jeff Beck, Pink Floyd, Pat Metheny.


Anthony: What are some of the music trends that you follow or don’t?
Tom: I don't follow trends but the only trends I ever followed were when I was in Punk / New Wave bands in the 80s The Drill and Invisible Sex. Though as a session musician I have performed pretty much every genre of music going.


Anthony: Any thoughts on Death Metal? Industrial? Shoegazer? Or even Hip-Hop?
Tom: Not really, sorry, but I guess like any art form it's gonna turn a lot of people on or off as the case may be. I did a hip hop cd a few years ago which has been used on films and TV around the world. 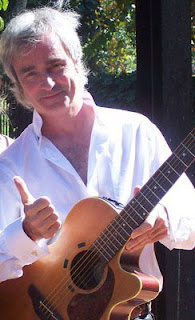 Anthony: Any solo material we can look forward to?
Tom: Well I am just about to release a cd in collaboration with Pa Bobo Jobarteh a master Kora player from the Gambia. My band The Monficats performed on the album which took a few years to finish as I have been so busy with touring and recording the Zzzz's stuff. It's a fantastic album and I'm very proud to have been involved in that. It should available on my website www.tomtoomey.com soon. I am long overdue another Solo album; the last one was Monficats which was a step into the unknown but lots of people have raved about it which is cool.

Anthony: So, any other music plans for the coming months?
Tom: Yeah, there are always plans, touring the States soon, playing in La Cubana, a Cuban band and trying to do some more writing. I'm always busy, thank God!


Anthony: Since we deal with Horror, I gotta ask: Do you follow horror films or books? Any favorites?

Tom: The only horror stuff I watch is when I am at someone’s house who watches either East Enders or Simon Cowell; then I'll make my excuses and go to the kitchen to make a cup of tea. There is enough horror in the world already; I am too sensitive to see any more,

although I am reading Pathfinder by David Blakely about the mission he did in the Iraq war.


Anthony: One last request: Can you select the ten most influential songs in your career?


1. All Along the Watchtower Jimi Hendrix


3. She's Not There Santana


8. The Thrill is Gone BB King


Anthony: Thanks for this great list. And, thank you for joining me on my venture into the world of blogs.
Tom: Thanks for the invite too; my best regards and good health to yourself and all your readers and hopefully see you at a gig sometime soon. Rock On!

Posted by Anthony Servante at 9:55 PM