Views from a Troubled Mind
Scene #15 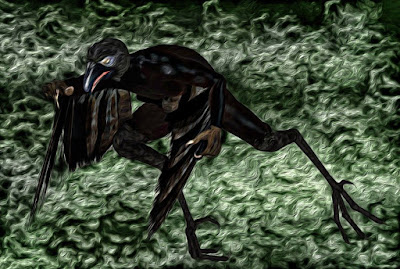 With all this talk about the Mandela Effect going around YouTube, where I spent much of my time when I'm not writing, I've given much thought to the possibility that this is another Flat Earth Society movement. I'd like to use the word "fad" to describe this trend, but that would demean Frisbies, Pogs, and Hula Hoops.

Let's first talk about just what this Mandela Effect is. There are a great number of people who remember events and objects that never existed. As the name of the effect implies, Mandela is the source of this new mass hysteria. There are many folk who remember the death of Mandela in prison, the eulogy given by Mandela's wife, and the coverage on the TV news. Yet Mandela was released from prison and became a leader in South Africa. There was no funeral or eulogy. Not in this dimension. Similarly, when the 9/11 attacks on the Twin Towers took place, many people, including our current president, remember hundreds of Muslims in New Jersey celebrating in dance at the destruction of the New York towers. I, myself, recall a few women dancing, but not hundreds (some say thousands). How can we have two different memories of the same event?

The answer is simple for the Mandela Effect Society: Both events took place. Both memories are accurate. However, they took place in different locations. One took place here on this Earth; the other took place on an alternate Earth. And somehow these two dimensions crossed, leaving Earth Two inhabitants, who remember the Mandela death in prison, stuck on Earth One, where Mandela was released from prison.

It's all about dimensions crossing, doorways opening, and Earthly citizens slipping into a dimension that is not their own.

Which brings me to the monsters.

In trauma, this phenomena is called "disassociative amnesia", where patients remember things differently than they happened. It's the mind's defense mechanism for protecting the patient from re-experiencing the horror of the original trauma event. In one patient's account, the young girl was molested by a trusted family member. Today, she remembers being abducted by aliens from outer space. She recalls details of the abduction clearly, the color of the lights at her window, the thin creatures that wrapped her in a cellophane material, and the experiment room on the spaceship where she was taken and held captive. She claims that the aliens tried to warp her memories with family molestation images, but she knows that she was taken from her bedroom by these creatures with huge eyes, silvery skin, and thin lipless mouths.

If we were to apply our theory of dimension shifting, our patient would really have been abducted, which is why the memory of any molestation does not stick. The kidnapping by these space creatures took place in her dimension, but she somehow got stuck here in this dimension where the vague memory of a molestation is present. Perhaps her Earth One persona is on Earth Two with memories of the physical abuse at home, while her therapist is trying to convince her that she was abducted by aliens. The persona who was abducted is stuck here with a therapist trying to convince her that she was molested.

Now let's turn our attention to my memories. I recall a large creature following me, a bird-like lizard with human appendages. To this day, I still dream of this monster. It lives by the ocean. I could be dreaming about having fun at the beach on a sunny day, but suddenly the sun is blotted out by a darkness, and this monster appears. It attacks the smaller children on the shore, it scatters the shanties of the homeless under the pier, and then it sees me and swoops down in my direction. That's when I wake up. I always wake up. Just in time.

But I never shake the feeling.

My Shrink told me to jot down any memories that I have of these dreams. Oddly, it's not the dreams that I recall so much as the events of the day following the dreams. There were dead bodies found in the homeless camp in the San Gabriel River basin; reports that made the news. A petting zoo was destroyed by strong winds, yet all the animals were killed--and not by the wind; again, this made the local news. Throughout the San Gabriel Valley, there are deaths that are unaccounted for, mostly homeless people. In addition, many birds, pets, squirrels, and possums are littering the yards in my small town. I've called the Animal Control Department many a time to come and pick up these carcasses littering my lawn.

Maybe Earth Two creatures have entered Earth One, our world. Maybe these creatures exist on an alternate dimension. Well, that's an good an answer for the dream monsters as the Berenstain Bears being mixed up with the Berenstein Bears.

Still, it does give one pause to reflect on this dimension-shifting. With quantum physics opening new doors to possible alternate realities, such possibilities give rise to the prospects of maybe multiple Earths within as many as a hundred or a thousand different dimensions. Each one with its own set of monsters.

For the trauma patient, it's one thing to hide behind an alternate version of your own original traumatic event. When aliens from space seem like a preferable alternative to a perverted relative, who's to say that we should force-feed "realities" to these patients?

This isn't my area of expertise, but with my meds, counseling, and therapy beginning to clear up the source of my nightmares, it's becoming clearer and clearer that my original traumatic event may be something I can face head-on someday soon. In the meantime, the monsters from another dimension are as real to me as the deaths in the homeless camps and the carcasses littering my street.
Posted by Anthony Servante at 3:13 AM No comments: