Views from a Troubled Mind
Scene #13 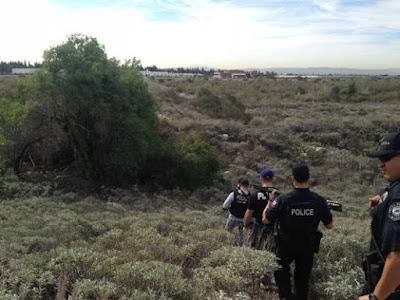 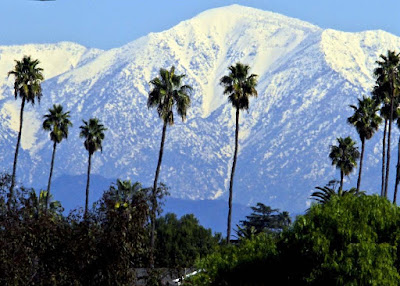 When the snow above the riverbed melts,
it will flood the homeless shanties

First time back to Pasadena in a month. The rain. The malaise. The murder on the train. Lots of murder and death over the past two years, but more so in the last six months. (Anyway, I digress; more on this later). So I can say this is my first time back on the train since the day of the killing. During the rains, death comes to the homeless camps. After the rains, the homeless seek shelter where-ever they can find it. 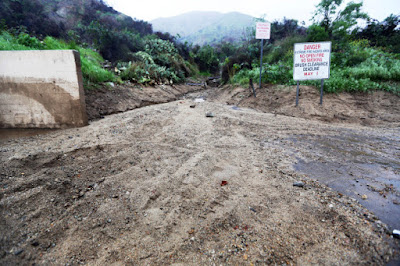 The melted snow flows down
turning into a river of mud

On the train platform of the station this cloudy day, a motley crew of homeless people loitered. One of them had opened a panel on the side of a power post where the neon advertisement display case sourced its electrical current. He redirected a few wires, shutting of the neon lights, and plugged his cell phone recharger into the outlet. He stood by this bike, which looked like a 1970s bicycle style that only teenage nerds rode. For the homeless man, the bike served to carry four large trash bags filled with aluminum cans with the back rack used to tie down an old suitcase of clothes (he opened the case to pull out a small pipe and a one inch by one inch zip lock bag carrying about a $40 bud. After his lit up and hit a long drag of smoke, two other homeless men (who I didn't know were homeless until the three men began to talk about the rain and their shanty encampments by the San Gabriel River).
"How'd your house hold up in the rain?"
"A few leaks but otherwise okay."
"What you smoking?"
"Medical bud."
"Pass me a drag. Keep the pipe. I got my own pipe."
"I don't got germs."
"Yeah, well I do."
The bike man addressed the third fellow, who seemed quite shy and reserved, although his furrowed forehead showed signs of a temper problem, "You want a hit?"
"Nope. Doctor says to watch my heart. No booze. No coffee," he said as he dragged a generous puff of smoke from his Sherman's cigarette. No one seemed to notice the irony.
Then the bike man noticed me noticing them. "You want a hit?"
"No, thanks," I said, realizing I wasn't invisible anymore. "But where can I buy some if I do decide I want some?"
"Pasadena."
"Where? Pasadena's pretty big."
"You can't miss it."
"I always do. I've been looking for the shop since pot went legal."
The cigarette man suggested, "Try the new shop by the CostCo. Not a big selection, but it's closer than Pasadena."
"Next to the CostCo?"
"You can't miss it."
The bike man offered, "Here, take this. It should hold you over." It was a pinch. About five hits worth. I opened my pill-holder, and he dropped it on the empty side of the two-pocket plastic container.
"Shit," said the cigarette man when he heard the police car radio's static, raspy voice. The three homeless men turned to the street. A Sheriff's SUV cruiser large enough to hold four men slowed as the deputy in the passenger seat looked right at the homeless men. "Shit, someone called them. Let's get out of here. Now."
Cigarette man and his buddy ran down the ramp heading east as the cruiser slowed at the west ramp. The deputy exited the vehicle and hit the ground running. He was angry.
The bike man untangled his recharger wires and nearly yelled, "Where is he?"
I told him, "He running up the ramp heading this way."
"Shit, shit," he said as he pulled his plug free of the outlet. "Where is he now?"
"Forty yards and closing in"
He closed the panel, jumped on his bike, and rode off in the direction of his friends.
The deputy stopped and looked around the panel. He called in to his partner driving the cruiser. "They're gone. Left only the smell of grass. The panel's closed. Almost had him this time. No, not worth my time giving him a ticket for the grass. Needed the panel to be open. Mischievous mischief will hold up in court since we witnessed it. Damn it, they're fast."
He nodded to me and smiled. "How's the homeless situation stacking up?" I asked. He answered, "We served orders to vacate the San Gabriel Riverbed to the dozens of "river-dwellers" living there. It took us four days just to find most of them. They tend to scatter when they see us. That's all we were doing when we saw these guys on the train platform--trying to serve them papers to vacate. If they're not on the riverbed, they're here at the station playing with the electrical switches or loitering at bus-stops pretending to be waiting for a bus. I guess it's better than being down in the riverbed after the rains. I don't know how they survive the flooding, but they manage. But see those mountains full of snow from the last storm? That snow's going to melt. And we haven't had that much snow since 1938, the last big deluge--rivers overflowing, houses falling off their foundations, streets underwater. So the Water and Power people are planning to dam up the river. That means the riverbed will be underwater. Got to move those dwellers out of there by Tuesday. Another storm is coming Wednesday through Sunday. You have a good day, sir." And then he walked back to the cruiser and off it went.
Then I thought about the piece of pot in my pill case. But it's not worth their time, he said. I once did three years probation for pot possession in the early 70s. Now it's not even worth their time.
The homeless trio were probably headed for the bus-stops to loiter or back to the riverbed to secure their shanty against the coming rain. What good is a notice to vacate when your shanty is the best protection you've got against the elements?!
For them it about life or death. Ignoring an order to vacate would mean an arrest, three hots and a cot, and a roof over their heads. Their choices were limited. And the law of nature was a lot scarier than the law of man.

February 2019 Irwindale man jumps in front of speeding car, San Gabriel Bridge shut down. I try to Google the latest news when I get home. I find nothing on the alleged suicide, but discover a pattern of death going back years.
January 2019 Man stabbed on the train between the Irwindale Station and the City of Hope Hospital Station. It takes the coroner 12 hours to arrive at the crime scene. Meanwhile, half the Sheriff's department and 75% of the TV news station vans litter the streets with their presence. Traffic is backed up for miles.
December 2018 Hit and run. San Gabriel Bridge shut down.
October 2018 Homeless man freezes to death in front of the Irwindale Liquor Store while waiting for the place to open. He was wearing only a T-shirt and pants. No shoes or socks.

I stop typing the dates. Seven more deaths in 2018. About 14 in 2017. Over 20, 2016. Too many. The commonality? The San Gabriel Bridge. The news says homeless camp residents use the bridge for a shortcut, get run over. The homeless say that they are targets. When the rain flushes them out of their camp, they have to cross the bridge. Those who stay behind risk flash-floods, animal attacks, and hypothermia. And murder by territorial hobos. "Hobos"? Is that still a word? But that's how the "homeless" refer to themselves in this little shanty town.

Today the local news says that it was a woman who jumped in front of the speeding car, not a man. She was on drugs. No shoes. The driver says that she appeared to fall from the sky in front of the car. Police surmise that another car had hit her and knocked her into the air and that she landed in front of the second car. A homeless man, her companion, says that she was running from an animal. Police claim they may never know how the accident happened, but the driver was not charged.

During the day, hawks fly over the homeless camps like vultures waiting for death. After I learned how the migration and infestation of the feral parrots in San Gabriel created a territorial alliance with the blackbirds, the hawks were pushed back to the mountains. The city now belonged to the alliance of feral birds. While the parrots and the blackbirds feasted in the suburb trash cans, the hawks, like rats, honed their survival skills to pick off the leftover food of the homeless. No, they don't feed on carcasses--they steal the food of these people, leaving these poor folk one step closer to death. It's easy to create a circle of shanties to ward off coyotes, bears, and wild dogs, but how do you fight off four foot birds with razor-sharp talons dropping from the skies to snatch your meal while it's on the plate??
You adapt. To the skies. To the rains. To the orders to vacate. You adapt. You recharge your cell phone on the train platform panels, while you scan the streets for patrol cars and scan the skies for hawks. Soon, the snow will melt and decisions must be made. You adapt. Just like the hawks, you adapt.

Posted by Anthony Servante at 2:04 AM