Views from a Troubled Mind
Scene #5
The Weather of Depression 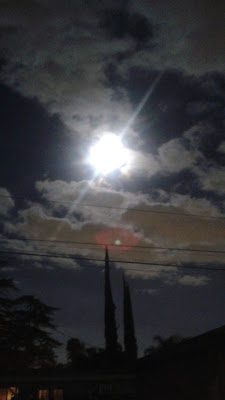 There was a strong wind last night. Lots of scary noises in the backyard. I listened from the front room inside the house as I watched TV. The plastic bucket used for mopping tipped over and rolled to and fro, hitting the dusty plastic chairs till one of the chairs also tipped over. Without the chair to stop it, the bucket rolled down the driveway into the street, where a car rammed it and flattened it with a creaking crunching moan. Then the fallen chair was dragged by the wind into the empty swimming pool. The clanging sound of the chair hitting the dry bottom echoed once, twice, thrive, till the sound died away in the wind.

The feral cat returned for its nightly visit for edible garbage. The trash can lids were closed. So the feline was disappointed and meowed. And meowed. And then the trash can lid flipped open. The wind? Another meow. A different one. Two meows. Then growls. Then voices: Half meow, half make-believe words. A clang of metal and plastic. The wind tipped the trash can? Angry meows. Curse words sort-of. Cat fight. One body slams against the plastic trash can; the metal handles jingle. The words turn to growls. The growls to meows. Till only one meow. The victor? Its meow fades into the trash can.

There are sounds of growls and shrieks. Scratching and clawing. Plastic tearing. Then the meow turns to a muffled scream inside the trash can. Its scream grows louder as it continues high into the wind. And fades to a distant silence. My brother's car pulls into the driveway. Into the garage. He locks the garage.

I hear my brother picking up the trash can, closing the lid. He enters the house. I ask, Did you see the cats? No, he answers; it was just the wind. I tell him that that's what the victims always say in horror movies just before the monster kills them. He shrugs it off.

In the morning, I arise and check the backyard. A plastic chair is in the empty pool. A flattened bucket is in the recycles (my brother's doing). A dead possum is under the dead shrub. Its stiff corpse stinks like skunk piss. I flip the trash can lid. It is filled with feathers. And blood. It stinks like nothing I've ever smelled before. Except once. Not too long ago. In a dream. But the Shrink said there are no smells in dreams. I find no comfort in that. It only can mean that what happened last night was no dream.

The morning TV weather forecaster mentions nothing of last night's wind. And today, after several weeks of 70 degree weather, it was 96 degrees hot. A windless weather.

I called Animal Control and stood outside drinking a hot cup of French Roast coffee, watching for the red and white truck. The neighbors laughed. Drinking coffee in this heat?! I wanted to explain that we are not cold-blooded animals that require sunlight to warm our blood. We are warm-blooded mammals whose temperature adjusts when hot and cold elements affect our body. Our bodies cool down when we drink something hot; it warms up when we drink something cold--the opposite of what my neighbors believe. We are not lizards. We are not birds. We are humans. We are apes. We are bears and dogs and cats. We adjust internally to the external temperatures. Hot coffee cools you down. I can imagine my neighbors lying in the sun soaking up heat to weather the cold night ahead. Damn reptiles.

I thought this through as I waited for the Animal Control handlers to pick up and dispose of the dead possum. One man arrived with heavy gloves. He asked if I had handled the possum. I told him hell no. He said, Good. Rabies. You never know. I just picked up a cat about a half-mile from here. Looked weird. Strange claw marks. I told him a cat fought with the possum. He said, Possum has little claws. Cat was shredded by long claws. Like maybe a bird. Feathers in the trash can, I thought. Said nothing to the handler. As he carried away the dead possum, I asked if he'd like a cup of coffee. In this heat?! he laughed. And drove off.

I checked the trash can again. It was filled with dead leaves. My brother raked the backyard as I waited on Animal Control. I asked him if he noticed the feathers and blood in the trash can. He said no. I decided not to dig through the leaves to find the blood. Rabies, you know.
Posted by Anthony Servante at 1:35 AM No comments: