Angel of the Abyss
by Hank Schwaeble
Reviewed by Anthony Servante 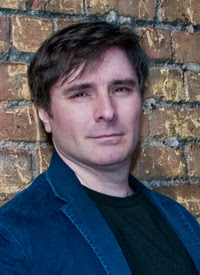 A graduate of the University of Florida and Vanderbilt Law School, Hank is also a former Air Force officer and special agent for the Air Force Office of Special Investigations. He was a distinguished graduate from the Air Force Special Investigations Academy, graduated first in his class from the Defense Language Institute's Japanese Language Course, and was an editor of the law review at Vanderbilt where he won four American Jurisprudence Awards.

The third Jake Hatcher novel, Angel of the Abyss, is due out September 30, 2016. 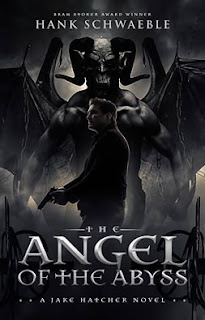 
Angel of the Abyss: Summary
Ex-special forces interrogator and demon-magnet Jake Hatcher went looking for trouble, and found it.

Finally able to be with the woman he loves, life for anyone else would seem charmed. But Hatcher’s good fortune came at a steep price. Two years after witnessing his former lover disappear into perdition, he may finally have discovered a way to free her. But the forces determined to stop him are hidden, and a deal with the Devil cannot easily be trusted.

Hatcher must discover for himself if he has what it takes to survive a battle of wit and wills with both an unknown contender for the Throne of Damnation and the being that has been its occupant since the dawn of Creation-- The Lord of the Underworld, the Father of All Lies, the Great Deceiver…

It's a wonderful thing in literature to enter the ink on a page and end up in the wonderland of horror. And Hank Schwaeble is not only a marvelous host but an erudite guide on these fantastic journeys.  His stories are well-plotted, utilize twists as a natural design of the story rather than as a novelty, as some beginner authors succumb to, and they balance the elements of grotesque sensibilities to create a scary universe that is at once comfortable to ease into and difficult to leave, even though it is filled with horrific landscapes and grand guignol flourishes. His prose melds 40/50s Noir style not uncommon to a Mickey Spillane novel with 2010s irony and humor. It also echoes the paintings of Bosch with its devilish detail without becoming trite or trivial, so don't blink or you will miss a salient story point amid all the demons, summoners, and moments of terror. You're in for a journey to Hell that's better than any Disneyland ride.

But on to the matter at hand: I have received a review copy of the book in exchange for an honest critique. I promise to use my critic skills for good and not for evil.

Now let's get to work.

The Jake Hatcher Series to date: 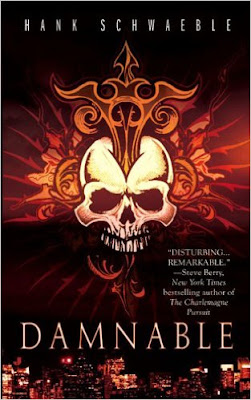 Damnable: Summary
Jake Hatcher is a combat veteran who's been trained to extract information by any means necessary--and is serving a military prison sentence for it. After he's granted an unexpected release to attend the funeral of a brother he never knew, Hatcher becomes drawn into a mystery involving irresistibly beautiful women whose motives and intentions are difficult to discern, inhuman females known as Carnates. Facing inscrutable adversaries and uncertain alliances, Hatcher becomes an unwitting component of a unimaginable plan, a plan intended to channel the one being that can end the reign of Heaven, and he soon finds that the streets of New York have become a secret battleground for forces he cannot comprehend. 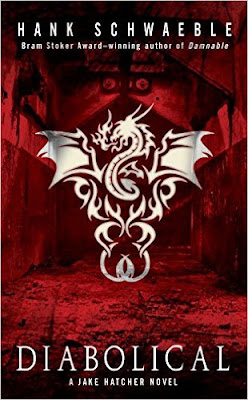 Jake Hatcher, lying low in Southern California, isn't all that surprised when he's asked to jump back into the battle between salvation and damnation and stop those bent on raising the forces of darkness--it's just why and by whom that's unnerving. Especially when it's put to him as an offer he can't refuse.

A former nun named Vivian Fall believes that a Hellion has escaped the infernal regions and returned to earth on an unholy mission--to unleash the forces of damnation on an unsuspecting world. Only Hatcher has the experience to track such a being. Only Hatcher has dealt with those who likely to know what what's really going on. And only Hatcher can get close enough to it--because the Hellion happens to be his own brother.

The Emperor of Shadows
Coming soon...


In Angel of the Abyss, the storyline picks up intertwined with the events of Damnable and Diabolical, but you can read the new Hatcher story as a stand-alone, much like the Repairman Jack stories by F. Paul Wilson tell individual tales that tie to a bigger picture. It helps to know the main events, but they are not crucial to enjoy AOTA. Once you've read the latest chapter, I'm sure you'll want to reach back for the first two entries in the Hatcher universe.


Jake is always clearly out of his depth in the supernatural dimensions between Hell, Demonic messengers, and Demonologists who always have an agenda that keeps the reader off-balance. Still, Hatcher manages to pull savvy maneuverings that keep him one step ahead of the hellish proceedings. So don't expect predictable situations that Jake will work his way out of, for this is not a James Bond movie where we know Bond will escape impossible traps.

For Jake, there is no way out. Yet time and again, he climbs out of the pan and into the fire. But half the fun is learning what constitutes the pan and the fire for Jake, for he is usually a pawn in a bigger game being played by evil forces, and it is his job to find out what these forces are up while being manipulated by two opposing forces of darkness. Our hero in one instance is caught around the throat in the grip of a massive demon claw only to be surrounded later by the caverns of hell, toyed with by an attractive but unholy creature, a messenger of Satan (although his name does not come up; still we know he's behind all these proceedings). And while the demons themselves are often terrifying, Schwaeble manages to make them humorous as well. When Hank hits his narrative groove, the horrors are relentless. So, too, is the humor.

Using a prose style that any poet would envy, Schwaeble brings the characters to life with gusto. Sometimes it's just the smirk on the hideous face of a creature from hell, sometimes it's a play on words. Hatcher's sense of irony in any given situation always catches his quarry off-guard. Even one demon says that he likes Jake, but still promises to torment his soul for eternity once our hero's soul is cast down to the depths of hell, to which Jake responds, But won't that make all the other tormented souls jealous? His jokes show his defense mechanisms at full capacity; still the demons can't help but allow a smile to crack their sinister grins. With the readers in audience, we, too, are charmed by our hero's "ambulance" humor in the face of eternal damnation.

It is always a joy for me to read the work of Hank Schwaeble. His storyteller narrator and prose skills blend so seamlessly that it's easy to forget you've been transported into the nether regions of a well-written novel. I can't wait for the next hellish adventure.

Posted by Anthony Servante at 8:32 PM No comments: