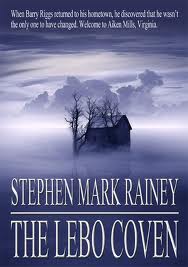 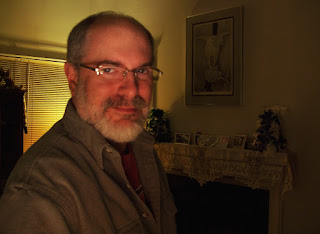 Stephen Mark Rainey is author of the novels BALAK, THE LEBO COVEN, DARK SHADOWS: DREAMS OF THE DARK (with Elizabeth Massie), BLUE DEVIL ISLAND, and THE NIGHTMARE FRONTIER; the short story collections FUGUE DEVIL & OTHER WEIRD HORRORS, THE LAST TRUMPET, LEGENDS OF THE NIGHT, OTHER GODS, and THE GAKI & OTHER HUNGRY SPIRITS; the scripts for three DARK SHADOWS audio dramas (THE PATH OF FATE, CURSE OF THE PHARAOH, and BLOOD DANCE); and over 90 published works of short fiction. For ten years, he edited the award-winning DEATHREALM magazine, and has edited three anthologies (SONG OF CTHULHU, DEATHREALMS, and EVERMORE). Mark lives in Greensboro, NC.

When Matt tried to kill Barry with his car, the two brothers went their separate ways. Barry moved to Atlanta and Matt stayed in the family home in Aiken Mill, Virginia. One day Barry is notified that Matt disappeared. Since he lost his job and his girl, he returns home and is shocked by the damage someone did to his house. Even more perplexing is the word Lebo painted in Matt's room in cow's blood.

The first night he is in the house strange things happen like a glass moving of its own volition; Barry hears strange inhuman noises and the word Lebo starts to glow. Jennifer Brand joins Barry in seeking answers. Since she is a gray mage, she senses the dark forces gathering around Barry and his house. They learn that Matt rented a room to Ren, a practitioner of the dark arts, who intends to invoke a spell that will require a blood sacrifice, preferably Matt's but Barry will do in a pinch. The two Riggs brothers and Jennifer try to stop him.

When I chose “The Children of Burma” from LEGENDS OF THE NIGHT by Stephen Mark Rainey for my article on History and Horror, it was because the short story had a lucid, engaging narrative and paid detailed attention to the history of Burma, especially during the Japanese occupation of World War II. As I’ve eagerly awaited the paperback version of BLUE DEVIL ISLAND to arrive in the mail, I got to reading THE LEBO COVEN, “a traditional, family-centered supernatural tale”, as Rainey calls it. So, even though I had (and still do) planned to review the historically based horror novel, Blue Devil Island, I jumped the gun a bit to review the latter work. And I’m glad I did because the book is a huge bit of horror fun.

Just as The Children of Burma engages the reader with the supernatural presence of a Lovecraftian beast, The Lebo Coven entertains us with an occult mystery. Barry Riggs, the hero of our story, has returned home to Aiken Mill, Virginia to solve the disappearance of his brother, Matt. Now the two brothers have had some violent differences, but Barry is drawn to the mystery and seeks to locate his lost brother or at least find out what happened to him.

Barry talks to the town locals, several well-drawn characters, from a childhood girl whom he used to pick on, to the bar patrons who have secrets to hide, and may or not be associated with his brother’s disappearance. But there’s murder afoot as Barry draws out the secrets, and our cast of characters begins to dwindle.

This investigation also leads Barry down dark and dangerous paths. The girl he used to pick on as a child now has witch-like abilities, part clairvoyant, part wiccan. He tangles with a spectre of darkness. Then there’s the equally mysterious Ren, accused of being into Satanism and the house-guest of Matt before his disappearance. These encounters with the various shades of “magick” crescendo into the final battle, which will answer the questions about Matt.

I must mention that the Epilogue is an excellent piece of prose that not only wraps up the story but provides a haunting work of poetry in and of itself. Well done.

Stephen Mark Rainey continues to write top-notch horror, although The Lebo Coven leans more toward scary rather than graphic supernatural thriller. Still, with Rainey, both styles work equally well. I still shudder at the ending of The Children of Burma. So, while you go buy your copy of The Lebo Coven, I’ll go check the mail to see if Blue Devil Island has arrived.
Posted by Anthony Servante at 12:08 AM